Hi there,
in cypher one can query variable length path through (b)-[:Reltype*]->(b) pattern
FOAF is a good example for that.

Now assume i have the following graph 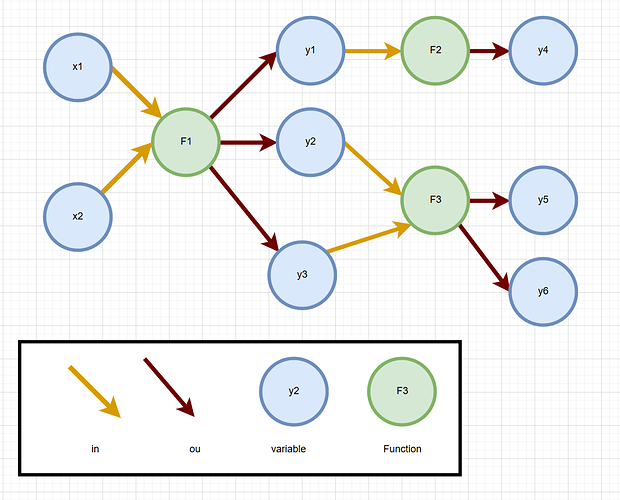 i could search the varables and related function with patterns like
(x:Variable)-[i:in]->(f:F)-[o:out]->(y:Variable)

i can distingish between inputs outputs Functions and Variables (important)
this would kind of represent the following mathematical term.

in this example relation and node filters on path extension (apoc) would be sufficient. But there are other graphs where label and relation filters are not sufficient. The order of relations would be important.

the order of relationships would be important
To clarify: Are you're requiring that after each in relationship there needs to be a out relationship. So two subsequent in would not be a valid pattern?
If that is your requirement, take a look at sequences for apoc.path.expandConfig at https://neo4j.com/docs/labs/apoc/current/graph-querying/path-expander/#_sequences.

I words, search all paths that

Close, just remember that the sequence repeats, so you don't need the V at the end, since it's at the start: sequence:'V, in>, F, out>'

If you want this to only return paths that end at V nodes, then you can use an end node label filter symbol > before the V: sequence:'>V, in>, F, out>'

beginSequenceAtStart:false, sequence:'begin>, F, out>, >V, in>'
As noted, the first relationship here isn't really the start of the sequence, but gets us one hop away to the sequence's real start.

Hi Stefan, Andrew,
i appreciate your help. This makes a whole category of problems much easier to takle.

I tested and i am very happy with it.