You're talking Conversational Design. Very tricky subject, for which a graph database is uniquely suited.

Something like Hume language processing would take you a long way in the right direction.

After that, it's about identifying the speaker's intent, and connecting that to a response which ideally prompts for a more specific inquiry. 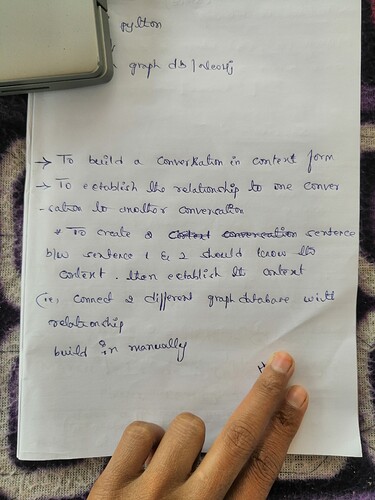 Natural language processing is not as simple as making relationships between conversations. Instead, it's about making a graph of each word, and it's meaning, along with the context of the conversation. From that, your graph would have a great deal of "knowledge" about any given statement or question.

Once you have that graph, you could then build into it a conversation interface that used the graph, and the speaker's query, to extract the speaker's intent, and match that to the desired response or an inquiry for more specifics. However, crafting this into a naturally feeling interaction between the speaker and a computer will require careful conversational design

Any other way to combine 2 conversational graph database automatically

Building automation takes more effort than doing something manually. So, yes, there are ways to do that automatically, but you'd still have to write the Cypher to do so.

If you're using Neo4j Desktop, you can add both dbs to the Neo4j instance, then query across both databases to move the data around.

In this guide, we will walk through how to manage multiple database within the Neo4j DBMS.

hlo sir gud evng .
how to combine 2 sentences automatically based on the context in single graph database programmatically

hello sir
any tool is their to build a conversation graph .