I would love to see spatial support in the Neo4j browser to control how nodes are displayed. As the growth of spatial data continues, this will be highly beneficial when querying and understanding the data.

so that the location on the screen is determined by a geo location property of the given node?

Yes. That is what I am thinking. This might also be helpful by allowing people to give geo properties to nodes so queries always show up in the "same layout" to see how queries changes.

I'll pass that suggestion back to product management. Thanks for sharing your idea.

This would be very useful - perhaps something to consider for Bloom as well - especially if it were possible to toggle the display of a map layer..

I agree. Doesn’t have to be geospatial, but any kind of axes or coordinate system. Perhaps even polar coordinates would work.

Just that it could be determined by some property of the node.

That is a good point - then you could do layouts by metaphorical distance/location.. That could be quite useful for visualizing relationships between domains etc..

@stefan.armbruster
Would be really nice to have this feature so I wouldn't have to tediously arrange the nodes myself :)

Second that! Being able to render using spatial coordinates on nodes both for actual geospatial locations and cartesian node coordinate layouts would be extremely useful. We are using both - one for modelling physical systems such as rock crushers, environmentally contaminated sites for remediation, and the other for content layouts... !

This is an example of a borehole diagram - I had to do the same thing - manually organize the nodes even though they are all actually geospatially located where they should be.. 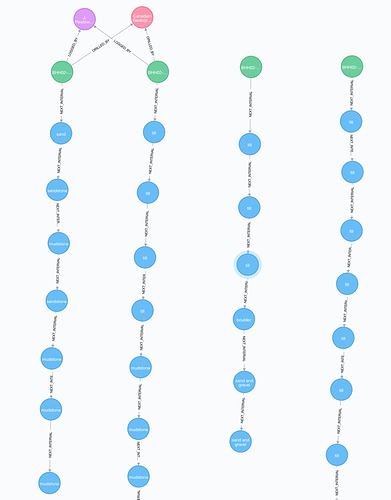