Just for fun I started building Settlers of Catan in Neo4j because why not.

So far I only have cypher commands starting to build the components. Not sure where this will go, but figure I would share it here. Maybe we can make a playable game using the GRANDstack?

Here is link to it on github: https://github.com/mckenzma/settler-of-catan-neo4j

Pretty cool! How can I help?

Thanks. It is only a concept at the moment. I am thinking about possibly making a playable game as one avenue, probably using the GRANDstack. I have been building a few other web applications on that stack and I really enjoy it. The other idea would be to create game scenarios and then do some ML type stuff on it to try and figure out optimal steps given the info is known and unknown. I am almost thinking building a playable game would still come first, and then build the ML kind of stuff on top of it.

What's your background with Neo4j?

I've been tinkering with Neo4j for several months now, working on a knowledge mapping project. I know enough to be dangerous, but still learning. Going forward, I am looking to develop several front ends to the knowledge map ... and so I've been looking into things like Py2Neo/Flask and GRANDStack. More generally, my data science / machine learning experience goes back more than a decade, crossing all kinds of terrain from NASA space missions to developing deep learning approaches for customer churn and behavior on the WWE Network. I'm now at a biotech company that focuses on wearables. I am very comfortable in Python, but quite a bit less so in JavaScript (though I've had to use it and learn it here and there for a long time). While at WWE, I also learned a bit about GraphQL and played around with it using Graphiql, but never ended up needing to use it much more (it was a wrong turn while learning the ins and outs of Facebook's Graph API).

Basically, I figure I could learn something about GRANDStack by helping on this project, which could then translate into my day-to-day life in one way or another.

Wow! That is impressive. Well I am always looking to work with people and tinker on little projects here and there. I am using projects like these to keep building my skills while I transition careers (moving into a space to use Neo4j more regularly). All the places you have worked sound super interesting.

The application of ML to this is definitely something that i see a bit further down the road, based on my expertise (or lack there of on the matter). Knowing someone like you is interested may help expedite that exploration!

Thanks! I'm here to help. Between work and kids, I don't have tons of free time, but I do have moments where I can indulge in a side project. If you're willing to take the lead with identifying objectives/tasks, I'm willing to knock 'em out when I have time. I'll start looking at what you have this weekend at some point, and start tinkering.

Excellent! I am usually around and respond quickly so feel free to hit me up.

How can I help?

I am still working on putting a plan together. My plan is to use GRANDstack to build a web interface to make a somewhat playable game, and then possibly find ways to provide move recommendations based on the game progress.

That sounds really cool! :) I'd love to be able to learn something from it. Is this the place to keep track of it for now?

here is my GitHub repo with the bare bones started 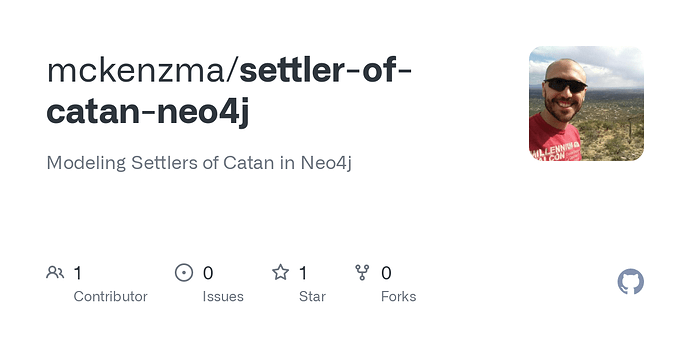 Modeling Settlers of Catan in Neo4j. Contribute to mckenzma/settler-of-catan-neo4j development by creating an account on GitHub.

You can set up 'tracking' for different categories and topics on this community site. You can also 'bookmark' it!

To the few people who previously responded, I haven't made any progress on this at the moment. I am juggling several projects at the moment. Have any of you had a chance to play with GRANDstack?

I've added a tag that allows your blog to be displayed on the community home page!