I deleted several DBMS directories on the file system.

They still show up in neo4j Desktop with an orange warning icon - and that is actually a cool feature for DBMS installs on removable media!

BUT in my case I really want to delete those entries ... question is HOW?

Did you remove the databases via a OS command of rm or similar? Ideally we would expect you to remove said database via a drop database <databaseName>; https://neo4j.com/docs/cypher-manual/current/administration/databases/index.html#administration-databases-drop-database

I had several different test installs with different neo versions and some were so corrupted that Desktop didn't work properly anymore so YES I deleted them directly on the file system.

Really my only problem is that I need to get those entries out of desktop somehow since they are usesless garbage now and I think the UI should really provide such a feature.

Is there another way to remove those entries or do I have to look at them forever now?

so I suspect there is a mismatch as performing a rm or similar is not expected or supported. and specificially when you create a database among many things it does it also creates a record in the system database that this new database is now available. And when you drop database .... besides removing the files from the filesystem it would also remove the record of the database existence from system. And so your rm has some what short circuited the process. 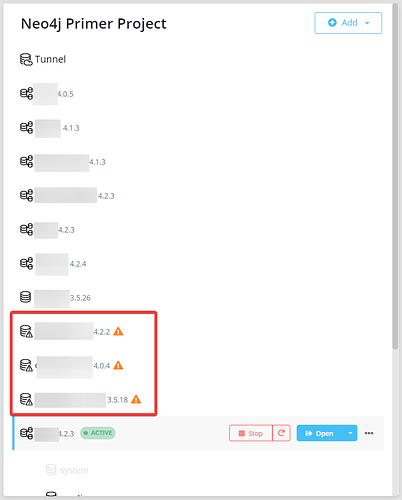 where are these entries stored? And again, I think there really should be a feature to remove them...

@chris3 I agree with you that this should be a feature (and actually I thought this was possible). Until that happens though, depending on which OS you're using, you'll find the list of DBMSs in one of these locations.

We don't recommend manually editing the persist files, but in this case, it should be fine if you just remove the entries that no longer exist in the filesystem.

Thank you for the file info - it worked!