I'm working with a fairly complex dataset (although it is only consists of ~665,000 nodes) and understand it will take a while to build... however, it seems to be taking so long that it's become clear that trying to keep things as simple as possible is not working.

Nodes were uploaded with no trouble. Relationships are taking a lot longer.

Can I please ask for advice on how to speed up this(?):

Thank you in advance!!

How does this bit of your query work?

Should it not be finding a specific Particle node?

I should have posted the node creation command(!):

I'm working with physics data that involves creating many subgraphs of nodes with triplet relationships (i.e. one node connects to three others within the subgraph).
First particles are created. Then I want to define relationships between mother and daughter particles.

The above is an attempt to connect a mother particle to its respective daughter particle, via their unique relationship.

Then, I'll repeat the process to connect to the other two types of daughter particles.

I've done it this way before - although it was over a year ago! So, I'm aware that the issue could be due to my outdated Neo4j knowledge --- or/and my poor internet connection!

Ok that makes sense. I'm still not understanding the daughter part of your 1st query though. The way it's written now means that the mother node will be connected to every other Particle node in the graph...is that what you want to happen?

See my screenshot where I create two Particle nodes and then do a MERGE (p:Particle) RETURN p 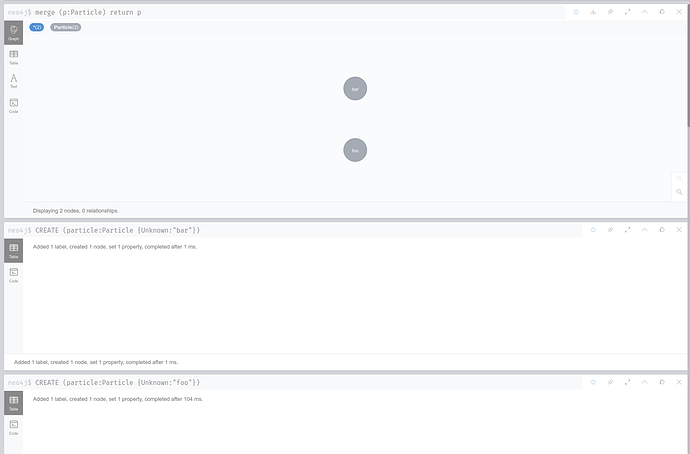 0 - ALWAYS create constraints before any date importation, or as soon as your graph grows up any match clause will take a year, Neo4j is not built for this kind random reading operation you absolutely need a constraint or at least an index.
1 - Use MATCH instead of MERGE to find the entity who must be related together.
2 - Use MERGE instead of match to create the relation, or you will get duplicates.