Hi,
I'm doing a POC which raised the following problem (couldn't find an answer in the forums):
I'm trying to import a CSV containing 10M relationships to a DB pre populated with about ~1.5M nodes with appropriated indices (or so I think).
The import rate starts off fine (~1K relationships per second) but quickly deteriorates. I estimate, it will take weeks to import the dataset. I read that people had no problems importing such datasets in less then an hour.

If I import 100000 lines (66%) then it runs 4 times faster. I don't understand why this happens. I thought it should scale linearly. 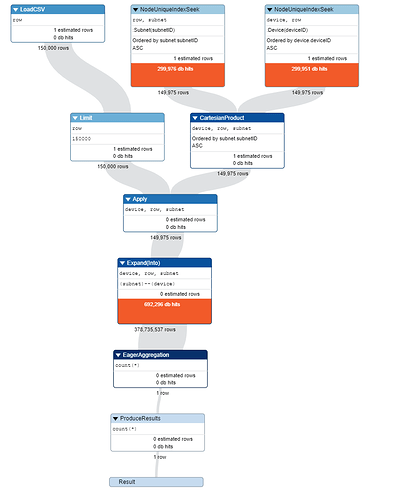 Any input will be appreciated

Edit 1:
Here is the actual import:

I think the source of the problem is related to the first import (the one that just counts) as it clearly works a lot slower when done on a little more lines. I assume this is done line by line, so I thought the time it takes should be linearly dependent with the number of lines, but clearly it not.

What is the create relationship cypher that is the performance problem? Please include that code sample too.

Do you need to match the relationship between the two items you're already matching by ID? Could it ever occur that those nodes by those IDs exist but are not already linked? As you're matching an undirected relationship with no type and no direction, and then not binding it to a variable, that relationship match seems not needed at all.

One small hint you can give to cypher is that if you know there are fewer subnets than devices (I'm guessing) then you can do something like this:

Which may change the plan by forcing the more selective match first.

Thanks David,
I added to my post the actual import used.