I need to fix an issue i am facing.
simply put, i need to select 500 random nodes and count the number of paths to a single target node at hops 1,2,3,4. i am doing it one at a time after coming up with those random nodes using a separate code. this means i have to run the count 500 times and it is time consuming. 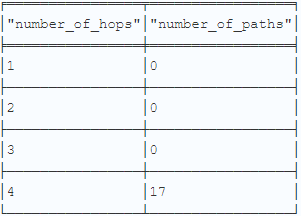 Do you have a specific question you need assistance with? Also, is your 'match' statement pseudo code, or are you really forming the Cartesian product between each node? What are the actual node labels?

If you want to find the number of paths by hops between 500 random nodes and a single target node, could you first match to get the target node and then execute the above analysis for each random node? You could accomplish this by passing the node id's of the 500 externally derived nodes and using an 'unwind' clause on the list to analyze the paths between the target node and the current random node. Is the selection code in cypher? If so, it may be able to be incorporated in the analysis code to make the process one step instead of two.

Can you provide more details?

yes, I have rather a large biomedical graph and my goal is to map 500 or more starting nodes to a single disease. i want the starting nodes to be picked randomly while keeping the target node constant. as far as labels, i do not want to specify them as there are 100+ labels. i already know the id of the target node. the difficulty is passing the two codes as one,
so far i was using this code to return the random nodes and then map them separately.
match (n)
return n.name, n.CUI, rand() as R
order by R
limit 500.
.................
i would then manually enter the CUI of the random node to the previous code 500 times.
my intention is to have those two codes as one.

Do you have a specific target node that you want to run this for chosen a priori, or do you want to repeat the mapping process of the 500 random nodes to each the disease nodes in the database?

i have a specific target node

You mentioned you don’t want to specify labels because there are 100+ variations. Are there a few labels it can’t be, so we specify just those to avoid terminating on nodes it can’t be?

Change the ‘id’ of ‘n’ to match your target node.

thank you very much. apologies for giving you hard time.
i ran your code and this is what it turned; of course i get a new number of paths every time i run it. 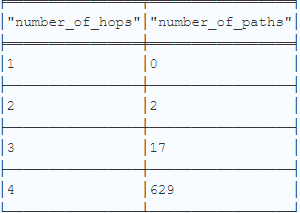 i am looking for a table that looks like this