We have imported the bitcoin blockchain into neo4j. I am trying to find the balance of every single bitcoin address on the network, however there are around 470 million addresses.

A transaction sends bitcoin to addresses, which may then send that bitcoin on in a new transaction.
From the left-most red (:Transaction) node, we see two outputs created, each belonging to a seperate (:Address) node in blue. One of these outputs is then spent in an onwards transaction, whilst the other is still locked to the address. 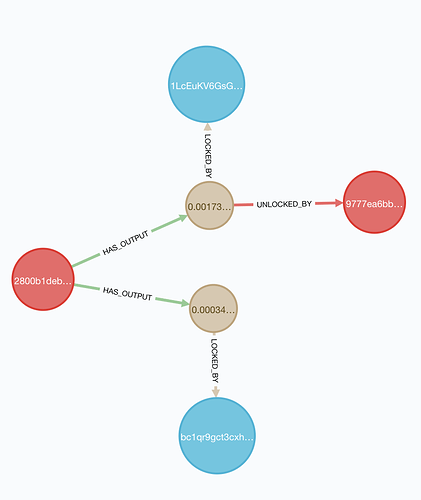 This works great for one address, but with 470 million addresses and around 1.5 billion outputs we start to see problems with DB responsiveness. Is there a good way to split a massive list into batches, operate on the batches and preferably stream results to csv in those batches as well? This is as far as I got, but I'm not sure this is doing what I expect as the DB still grinds to a halt:

Does anyone have any suggestions of how I could do this more efficiently?

Consider trying apoc.periodic.iterate. I think it's going to do something similar but give you better control over your code flow. You want to stream all of the addresses to it, it will divide into batches for you, and give you parallelism control.

Also understand with the bitcoin dataset that you're going to want as much RAM and page cache as you can afford. Since you're calculating balances for every address, this is going to require pretty much the entire database, which may end up with you loading and reloading a lot of data from disk again and again into your page cache. The bigger your page cache, the better this will perform.

I probably wouldn't try to stream results from this CSV but would write either separate nodes with your results (which you could reconstitute later) or I would use something like neo4j-streams to publish messages with the total for each wallet, thereby creating a stream of results which you could separately manipulate however you chose.

Did you get the answer for your query ?
i mam dacing the same issue