It's my pleasure to announce the release of Neo4j OGM v3.1.3.

This release fixes a lot of issues that have been open for quite some time. Especially modeling a domain on basis of abstract classes works now as described in the documentation. One doesn't have to annotate abstract base classes with @NodeEntity anymore. If the abstract base classes contributes to the index, its name will be used as one label.

Also @PostLoad has some noteworthy changes. A method annotated with @PostLoad doesn't have to be public anymore. Thus it helps keeping a domain closed and doesn't expose internal methods.

Apart from treating @PostLoad the same way as @PostConstruct is defined by JSR-250, @PostLoadmethods are now recognized in class hierarchies as well and can be overwritten.

For the full list of changes, see the release on GitHub: Release v3.1.3 · neo4j/neo4j-ogm · GitHub

OGM v3.1.3 will be included in the upcoming release of Spring Data Neo4j Lovelace (5.1) and also with Spring Boot 2.1.

It's my pleasure to announce the release of Neo4j OGM v3.1.4.

This release contains mainly bug fixes but notable the new SPI to intercept all Cypher statements before they are sent to the database.

We also are introducing a different way of converting parameters and using native types wherever possible. This is incubating and needs to be explicitly activated.

For the full list of changes, see the release on GitHub: 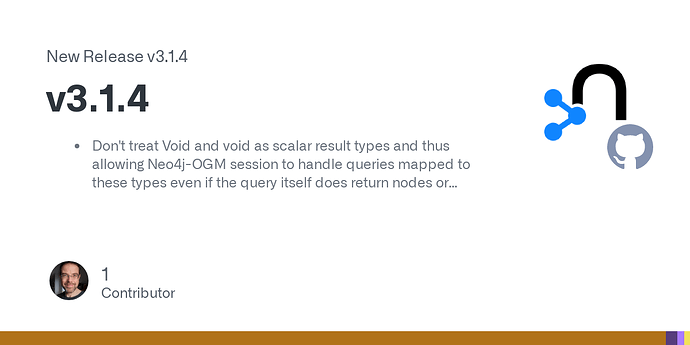 Don't treat Void and void as scalar result types and thus allowing Neo4j-OGM session to handle queries mapped to these types even if the query itself does return nodes or properties. #479 Fix a bug...

OGM v3.1.4 will be included in the first service release of Spring Data Neo4j Lovelace (5.1.1)

Today we released a service release for the 3.0.x line as well: 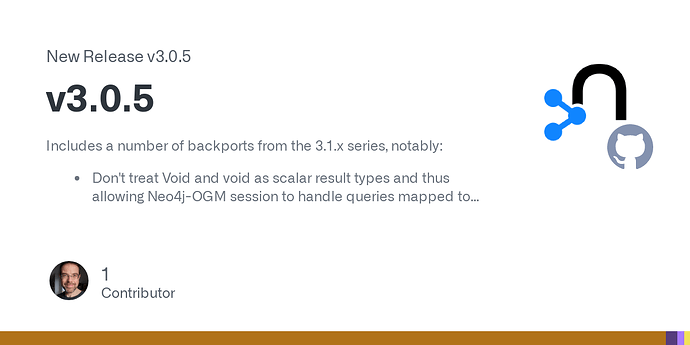 Includes a number of backports from the 3.1.x series, notably: Don't treat Void and void as scalar result types and thus allowing Neo4j-OGM session to handle queries mapped to these types even if ...

That contains some back ports from 3.1.x.

Double release of Neo4j-OGM in the past days. 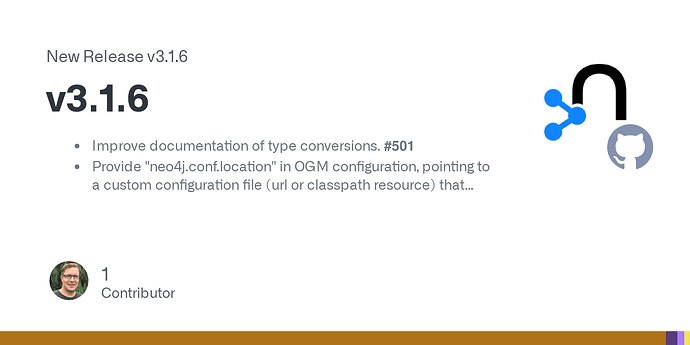 Improve documentation of type conversions. #501 Provide "neo4j.conf.location" in OGM configuration, pointing to a custom configuration file (url or classpath resource) that allows to configure the ...

and we are proud to announce the second alpha release of Neo4j-OGM 3.2. 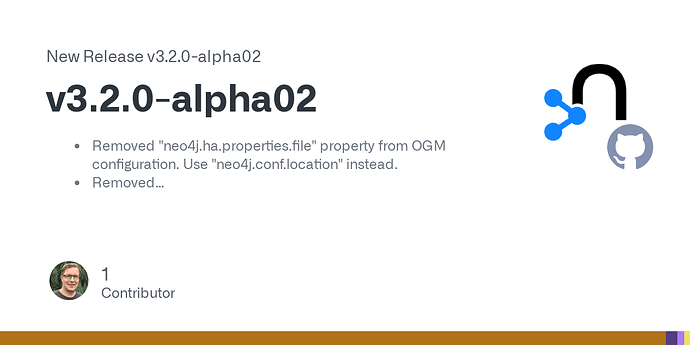 Neo4j-OGM for Quarkus has been released: 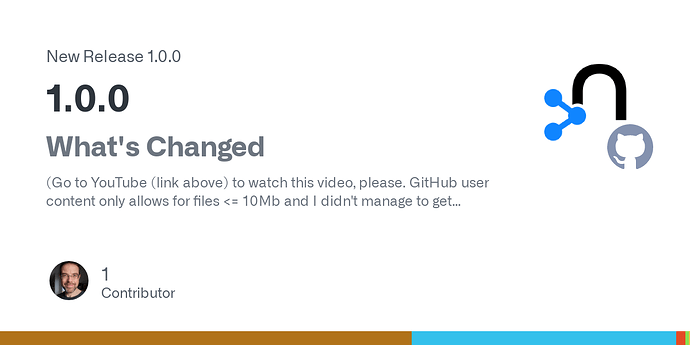 What's Changed (Go to YouTube (link above) to watch this video, please. GitHub user content only allows for files <= 10Mb and I didn't manage to get everything presented in that size 😉) 🚀 Features... 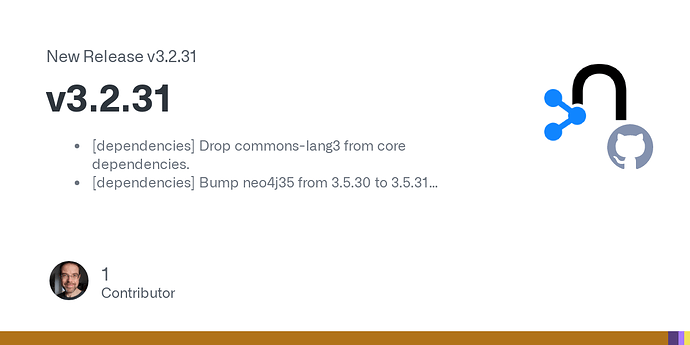 Neo4j-OGM Quarkus Extension 1.0.1, mostly dependency updates, including the above 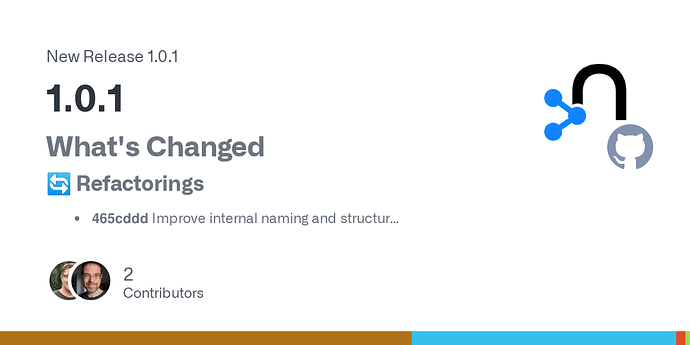 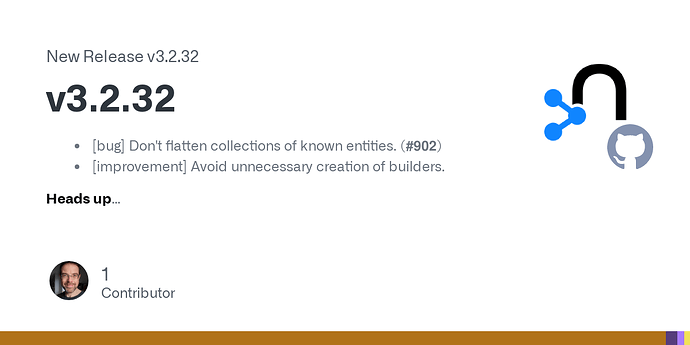 [bug] Don't flatten collections of known entities. (#902) [improvement] Avoid unnecessary creation of builders. Heads up 60e5f51 (the fix for #902) can lead to breaking changes in some custom quer...

Those are the latest dependencies 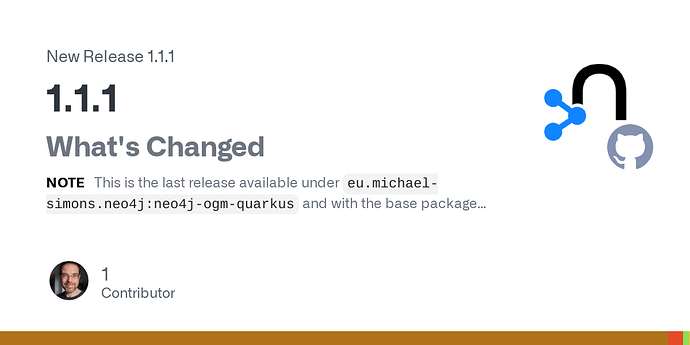 What's Changed NOTE This is the last release available under eu.michael-simons.neo4j:neo4j-ogm-quarkus and with the base package ac.simons.neo4j.ogm. The next release will be 1.2.0 under org.neo4j:...

while the relocation has been done in a second release 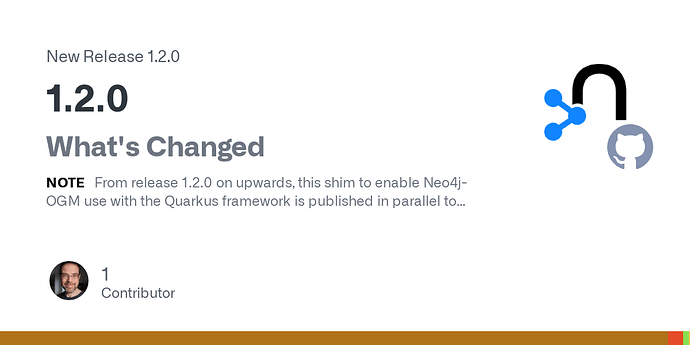 What's Changed NOTE From release 1.2.0 on upwards, this shim to enable Neo4j-OGM use with the Quarkus framework is published in parallel to Neo4j-OGM itself, under the following coordinates: org.ne...

This will be picked up Neo4j-OGM-Quarkus on the next patch. You can always drop-in a later version, though.