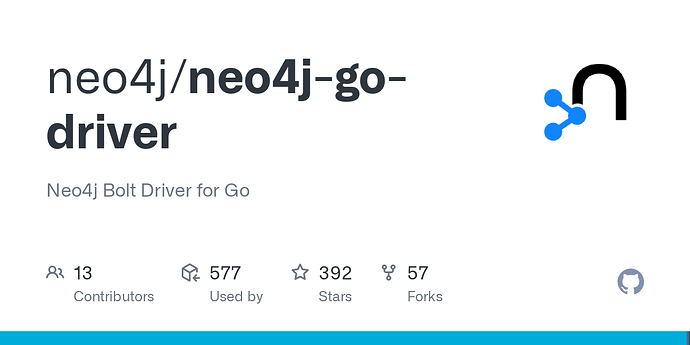 Neo4j Bolt Driver for Go. Contribute to neo4j/neo4j-go-driver development by creating an account on GitHub.

Just wondering has anyone got any success with this driver ? I've tried and tried to get v1/v4 versions working with no success.

I've tried using the example @ Using Neo4j from Go - Developer Guides - yet that looks like it's not really reflecting the driver.

Could someone point me to a place where a know working version is working + possible a sample code - I wish to connect to a 4.x version of Neo ?

I hope it's me and not something that is flakey with the neo4j go driver build on GitHub.

Up until now I've used the trusty gopkg.in/cq.v1 drive - however that is not able to connect to 4.x versions.

You can find such an example here: GitHub - neo4j-examples/movies-golang-bolt: Neo4j Movies Example application with built-in HTTP server using the neo4j-go-driver.
If you could pinpoint what's missing or wrong in the README of the driver repo, that would be awesome!

I also noticed the developer guide is fairly outdated, so I'm going to update it now.

Thanks - I'll work with the movie example/I've been able to build and run. Would be very nice just have a few very simple example/s -

The movie repo I guess is nice for some / but ideally missing the point as really a simple base example.

What about this example: GitHub - neo4j/neo4j-go-driver: Neo4j Bolt Driver for Go? What should be added in your opinion?

Thanks , I've got that working - my troubles seems to have been linked to the mod file + using docs which do not really reflect the current driver.

As I mentioned - it would be super useful to have super basic example/s of the core functions - create / match type - without more complexity. Whom ever wrote that last example certainly created complexity where it's not needed - just hides the core - Keep it simple would be great for sample code. A little annoying that the use as dev's has to de-crypt that code to get back to the basics.

I'm not sure how we can simplify the README example further since it's a small single-file Go program already.
What should be removed there in your opinion? Feel free to copy the contents in a GitHub gist and share the reduced version you'd like to see there, that would be super useful.