I've just been discovering Jupyter(Lab) notebooks on one side (new need in my day to day's official job) and playing with Neo4j for few months on the other side. Within my local test&crash sandbox (Debian VM with Docker running in VirtualBox on my Windows laptop), I do have a docker version of several tools including among others:

I did install Neo4j python drivers (official and py2neo one 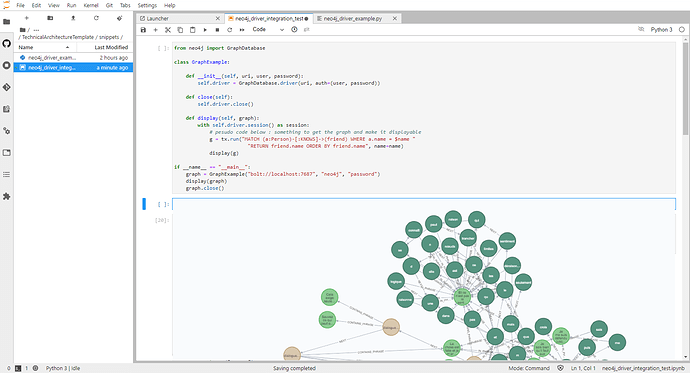 JupyterLab with Neo4j graph1676×908 205 KB
s) in jupyterlab and am able to query the neo4j instance in docker from there (cells with python kernel), retrieving data with cypher queries...

My intent would be to display graphical outputs of my graphs into jupyterlab cells.
Ultimately, including neo4j browser or bloom's rendering would be ideal for documentation purposes.

Could someone advise on how to get into that direction ?

My first tries were as simple as generating neo4j outputs in the browser as svg or png stored then at a given jupyterlab location, so that it can be rendered as images then in the notebook.
Being unable at the moment to display neo4j browser in jupyterlab so that to capture as a screenshot what is displayed there, I would be looking for the following solutions :

Note: I'm not a python guru, used to code in java or scala when I was a developer and quite still new to neo4j and jupyter to some extent but still willing to learn

Thanks in advance for any feedback, guidance or hint on this topic

Hi Xavier, were you able find a way to display Neo4j graphs in Jupyter(Lab)?

Thanks for getting in touch on this topic.

Still using either image rendering as an intermediate step for graphical rendering from Neo4j or python drivers for querying graphs for table formating from within JupyterLab.

Actually, I've been working on JupyterLab, DrawIO, GitLab and BonitaBPM working together to implement a full process of creation, sharing, publishing, reviewing and approval for Technical Architecture documentation. I'm in the field of IT Cloud & Legacy infrastructure at the moment, maintaining an image of the infrastructure as an architecture view between several layers. The data set I'm using is extracted from various IT tools such as: Netbox & NLyte for DCIM, EfficientIP for IPAM, vCenter for VM... This is not meant at being a uCMDB but rather, in comparison with DrawIO schemas, a way to check on expected architecture "on paper" versus the reality coming from various Source of Truth data sets. Using graphs, I'm able then to provide different views on this data, like application to infrastructure mapping, consistency checks, correlation rules, what if scenario... through cypher queries.

I've realized that embedding the graphical view avialble in Neo4j Browser or Bloom in a python framework such as JupyterLab is far from being obvious :). At least from my little window.

I was hoping to be able to render as an IFrame the Neo4j URL with some parameters (like a Cypher query) and programmatically, save the rendered output into the notebook like nbconvert does as attachments or in a separate folder.

I've been looking into that direction lately. But I'm afraid I have several steps / difficulties in there to get close to a solution. I guess a more inclusive solution would be to embed neo4j browser as a JupyterLab extension (like there is one for DrawIO).

Will keep you / the community posted if I figure out something.
Any help / hint appreciated though
Xavier

s an IFrame the Neo4j URL with some parameters (like a Cypher query) and programmatically, save the rendered output into the notebook like nbconvert does as attachments or in a separate folder.

I am also following, so please do update if you find a path(s) forward!

@xabierarbonies @oleg_neo4j where you guys able to find a way to make the graph interactive in jupyterlab?