I have a remote graph on neo4j 4.1.3. bolt+s (7687) is the only open port. I have GDS working via Neo4j Desktop's browser. I want to try out Graph Data Science Playground to speed up using GDS Algorithms. However, I am unable to connect to it. 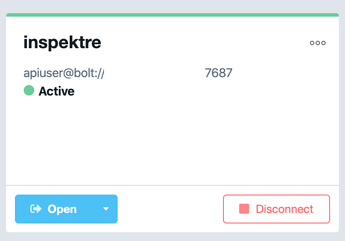 After several attempts, I do not have any luck.

GDS Playground - Does not connect

What am i doing wrong? Do i need HTTPS to be enabled as well? Is GDS Playground only meant for a local graph?

Hmmm, there might be a bug in how it tries to connect to remote databases, I'll have a look.

In the meantime, you can try the hosted version of the app - http://neuler.graphapp.io/

I am able to connect with this hosted version

Cool, glad to hear that worked. I think there might be a more general issue when trying to 'auto-connect' to the active graph, so maybe I should add the same login form to the desktop version.

I had assumed that automating the database connection was helpful, but it actually seems to be more of a hindrance!

I forgot to let you know that we've updated the version in the Desktop to allow you to connect in the same way that the hosted version does.

@mark.needham I've been using the newer version of the desktop quite before you notified me. I really appreciate this personal touch mate

I am quite ecstatic that I can use GDS with my remote graphs! GDS FTW, I feel like a rocket scientist with the algorithms.