Neo4j-admin import successful but no data shown in database

I am using Neo4j Desktop with windows 10. I created a new database, imported a small csv file using the sample movies.csv. It says successful with 3 nodes added. The database shows zero nodes. Some post says that the neo4j service needs to be restarted. Not successful with the command (service not found). So I shutdown neo4j, still the same. I restarted the computer, still the same. I understand this can be down via load from csv but if there are big volume data, import should be a lot (10 times) faster according to what I read than load from csv. Import and export are basic functions, couldn't them be made easier? particularly for windows users. I guess it works better with linux.

Just as a comments on the load csv from file, here is the what exampled on the website, and here is what got from the system: 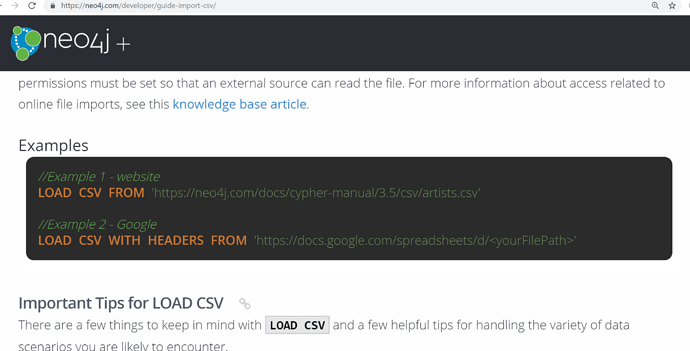 I think there is a confusion about how the data loads work.

It works same both in Windows or Linux. There is no difference.

In the case where you are getting error after loadcsv line you need to have some cypher to process the data. That line by itself will give error.

This will load the file if it exists and returns the first record in the file.

Make sure the file is in "import/" directory for Neo4J install.

I am having a similar issue where I run the admin tool import and see a new database in my /databases directory. I even get the following output after running the import command:

When I open the console or desktop I cannot see the database as an option in :sysinfo

I resolved the issue. The steps I found to successfully import a set of CSV using the admin -import tool is to: