Multiple relationships with one query, loop-function?!?

Hello, I have an issue and I hope you can help me.
I have imported some csv-Files to create nodes and it worked. They include just generic simple data.
For example:

Now I want to create multiple relationships with just one query. Of course I can do it like that ...

depending on how large of a loop but one could

Interesting, but I have round about 200 pid`s that have to be related. This could work for my other nodes with less datasets.

Your first recommendation unfortunately does not create anything:

The loop-Version does not work, because of the syntax I guess.

So I tried that with a match before the foreach, but now it wants to create an existing node. I just want the combining by a new relation :(

regarding the syntax error my mistake. you need one final trailing ')' at the end of the line and thus as well as my mistake again in that you can not do a create within a foreach. However you can merge and presumably accomplish the same as originally requested and

and so the above will find a
:Person node at pid=loop
:Address node at aid:10+loop

if they dont exist, create said nodes and then also create a relationship between said nodes. If the :Person and :Address nodes already/previously exist then we will not create additional nodes, and the same for the relationship as well

I got the same error-message with merge.

I also tried with set: 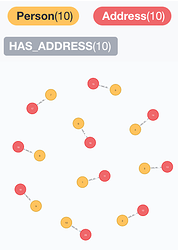 and apologies for overthinking this but rather than

you can also do

Thank you, the last one helped :)