This is the beginning of a series of posts about link prediction with Neo4j. We’ll start the series with an overview of the problem and associated challenges, and in future posts will explore how the link prediction functions in the Neo4j Graph Algorithms Library can help us predict links on example datasets.

Let’s start at the beginning…what is link prediction?

What is link prediction?

Link prediction has been around for ages, but as far as I can tell was popularised by a paper written by Jon Kleinberg and David Liben-Nowell in 2004, titled The Link Prediction Problem for Social Networks.

Kleinberg and Liben-Nowell approach this problem from the perspective of social networks, asking the question:

Given a snapshot of a social network, can we infer which new interactions among its members are likely to occur in the near future? We formalize this question as the link prediction problem, and develop approaches to link prediction based on measures for analyzing the “proximity” of nodes in a network.

More recently, my colleague Dr Jim Webber has been explaining how the evolution of a graph can be determined from its structure in his entertaining GraphConnect San Francisco 2015 talk where he explained World War 2 using graphs.

Apart from predicting World Wars or friendships in a social network where else might we want to predict links?

In each these examples, predicting a link means that we are predicting some future behaviour. For example in a citation network, we’re actually predicting the action of two people collaborating on a paper.

Kleinberg and Liben-Nowell describe a set of methods that can be used for link prediction. We can see a list of these in the diagram below. 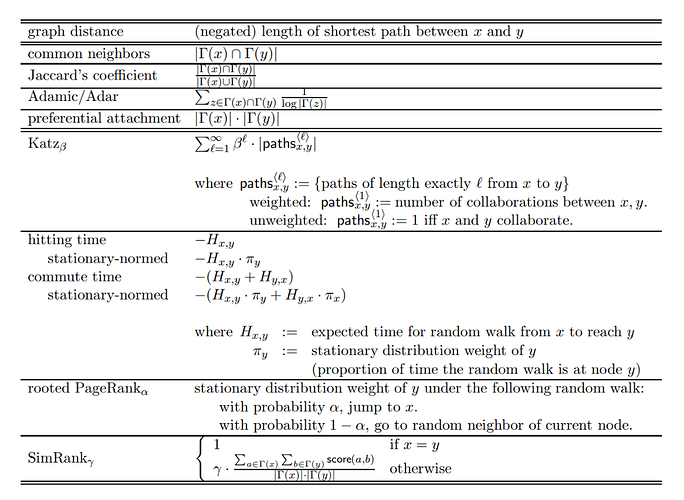 These methods compute a score for a pair of nodes, where the score could be considered a measure of proximity or “similarity” between those nodes based on the graph topology.

The closer two nodes are, the more likely there will be a relationship between them.

Let’s have a look at a few of these measures in more detail so we can get a feel for what they do.

One of the simplest measures that we can compute is common neighbors, as described by Ahmad Sadraei:

The common-neighbors predictor captures the notion that two strangers who have a common friend may be introduced by that friend.

This introduction has the effect of “closing a triangle” in the graph [i.e. a triadic closure as described in Jim’s talk] 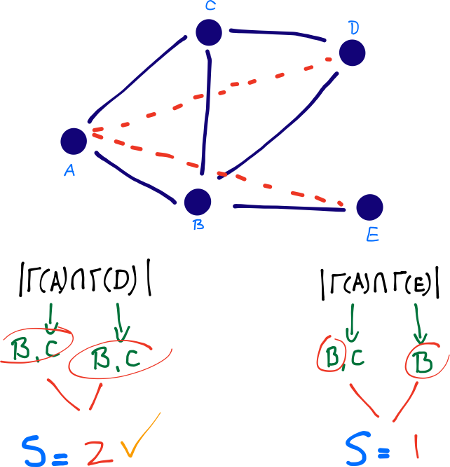 As the name suggests, this measure computes the number of common neighbors that a pair of nodes share.

Therefore nodes A and D would be considered closer and more likely to be connected by a link in future.

This algorithm was introduced in 2003 by Lada Adamic and Eytan Adar while researching how to predict links in a social network. 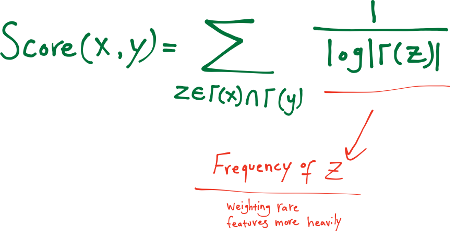 This measure builds the common neighbors, but rather than just counting those neighbors, it computes the sum of the inverse log of the degree of each of the neighbors.

The degree of a node is the number of neighbors it has, and the intuition behind this algorithm is that when it comes to closing triangles, nodes of low degree are likely to be more influential.

For example, in a social network, for two people to be introduced by a common friend, the probability of that happening is related to how many other pairs of friends that person has. An unpopular person may therefore be more likely to introduce a pair of their friends.

This is one of the most well known concepts amongst network scientists, having been popularised by Albert-László Barabási and Réka Albert through their work on scale-free networks. 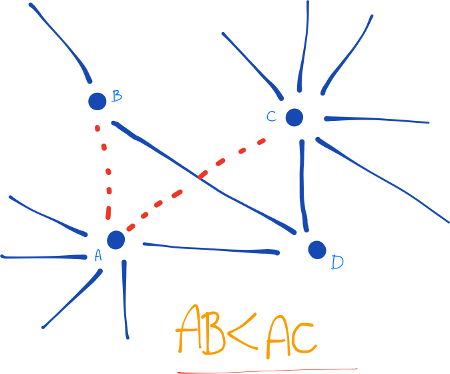 This measure is one of the easiest to compute — we take the product of the degree of each node.

We chose to start with these ones as they are some of the most common ones we encountered while researching this topic. These algorithms are used to compute values that will be used as part of a larger process.

Let’s quickly learn how the other 5 algorithms work:

Now let’s have a quick look at how to use them. If you haven’t installed the Graph Algorithms library before, it’s super easy — just a one click install from the Neo4j Desktop.

Now let’s see how to use the common neighbors function from the library by revisiting the example graph from the previous section.

We’ll first create the graph in Neo4j by executing the following Cypher query: 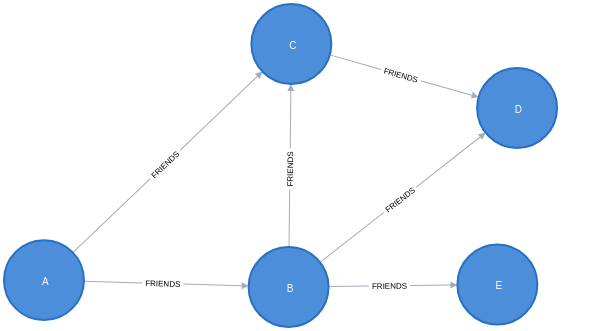 And then compute common neighbors for nodes A and D using that function:

By default the function assumes that it can compute its score using relationships of any type and in either direction. We could also choose to specify this explicitly by passing in parameters:

Just for good measure, let’s try one of the other functions to check we’ve got the hang of this.

The preferential attachment function returns the product of the degrees of the two nodes. If we run that for nodes A and D we would expect to get a score of 2*2=4 as nodes A and D both have two neighbors. Let’s give it a try:

Great! So we know how to compute these scores for our Neo4j graphs. What now?

What should we do with the link prediction scores?

So we’ve now determined that our can be solved by link prediction and we’ve computed the relevant proximity measures described above, but we still need to decide how to use these measures to predict links.

There are two approaches that I came across in the literature:

We can use the scores from the link prediction algorithms directly. With this approach we would set a threshold value above which we would predict that a pair of nodes will have a link.

In the example above we might say that every pair of nodes that has a preferential attachment score above 3 would have a link, and any with 3 or less would not.

In this series of posts we’re going to focus on the supervised learning approach.

Once we’ve decided to use a supervised learning approach, we need to make some decisions related to our machine learning workflow:

Many of the link prediction measures that we’ve covered so far are computed using similar data, and when it comes to training a machine learning model this means there is feature interaction issue that we need to deal with.

Some machine learning models assume that the features they received are independent. Providing such a model with features that don’t meet this assumption will lead us to predicts things with low accuracy. If we choose one of these models we would need to exclude features with high interaction. 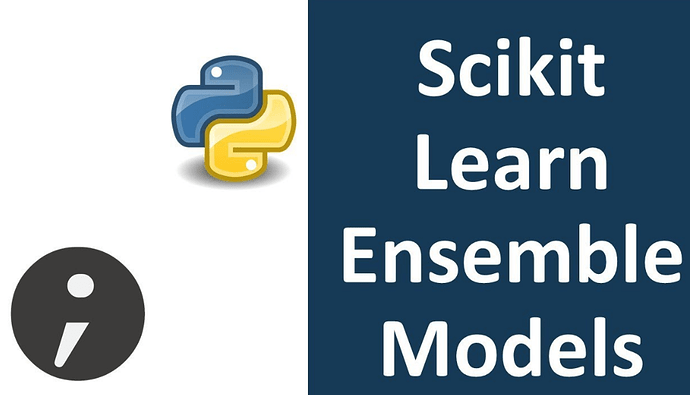 Alternately, we can simplify our life by choosing a model where feature interaction isn’t so problematic.

Ensemble methods tend to work well as they don’t make this assumption on their input data.

The tricky thing with the train and test set is that we can’t just randomly split the data, as this could lead to data leakage.

Data leakage can occur when data outside of your training data is inadvertently used to create your model. This can easily happen when working with graphs because pairs of nodes in our training set may be connected to those in the test set.

When we compute link prediction measures over that training set the measures computed contain information from the test set that we’ll later evaluate our model against.

Instead we need to split our graph into training and test sub graphs. If our graph has a concept of time our life is easy — we can split the graph at a point in time and the training set will be from before the time, the test set after.

This is still not a perfect solution and we’ll need to try and ensure that the general network structure in the training and test sub graphs is similar.

Once we’ve done that we’ll have pairs of nodes in our train and test set that have relationships between them. They will be the positive examples in our machine learning model.

Now for the negative examples.

The maximum number of negative examples is equal to:

A model trained using data that’s this imbalanced will achieve very high accuracy by predicting that any pair of nodes don’t have a relationship between them, which is not quite what we want!

So we need to try and reduce the number of negative examples. An approach described in several link prediction papers is to use pairs of nodes that are a specific number of hops away from each other.

We’re now covered the theory behind link prediction, and we’re ready to try out this approach on a dataset. That’s exactly what we’ll be doing in the next post of the series, which will be coming out next week.

In the mean time, if you’re interested in this topic the following links may be of interest:

Link Prediction with Neo4j Part 1: An Introduction was originally published in neo4j on Medium, where people are continuing the conversation by highlighting and responding to this story.

I need to detect common neighbours based on the possible relationship types. I tried below and it works for one relationship

But i wanted to two type of relationships in the relationship Query and it does not work such as "rel1|rel2". Please let know

If you have that 'null' value it should consider all relationships between those nodes, and then if you wanted to only consider one relationship you'd do this:

So are you saying:

We do the latter in APOC but haven't done it here at the moment. We can look at adding that if that's what you need.

I have been following your excellent two articles and applying the learning to my (anonymised) graph of connections between social care clients.

Much of the graph is incomplete because the intial data is entered manually and often the person will create something link Child <- Mother, Child <- Father but will not create the obvious link between the Mother and Father to close the triangle.

I think Link Prediction can help me suggest links that should be there and also possible debug existing links.

I feel I am missing that last bit of intuition to work out what links are missing. How would I apply the trained model to a new set of data from the graph and determine that two nodes should be connected - what metric tells me this?

I would appreciate any help you could offer..