How to connect nodes in common

Im working in a project using cypher and im having issues to do some stuff. Firstly I must say that it's my first time with this and I feel a bit stucked.

Then I do the same with Ocean's Eleven, and i get two differents graphs (uploaded in one photo because i have some restrictions as a new user) 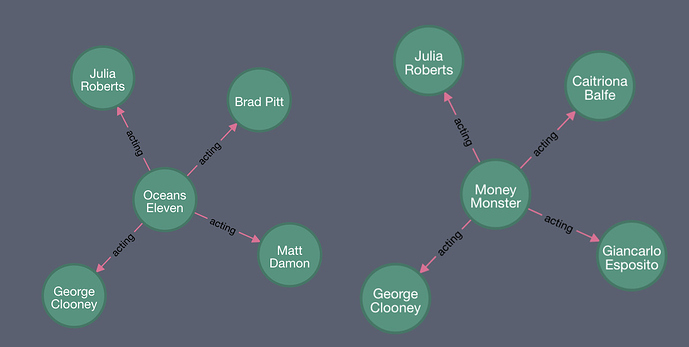 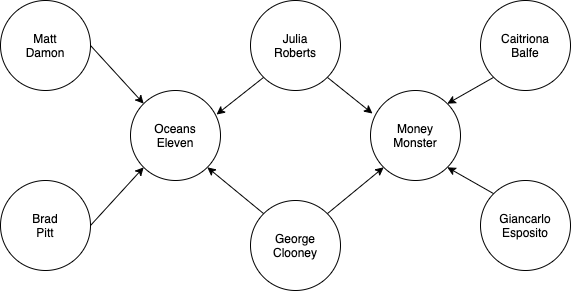 I mean, I would like to show the actors in common between two films...

How I could connect the nodes in common between two other nodes?

I wish I have explained properly

In the image you provided, all the actor nodes are directed towards the film. But in your neo4j output, it is in reverse. And also that the actors also came under the label Film rather Actor.
The mistake is at 3rd line of your query 2. It should be as below.

CREATE (Money_Monster)<-[:acting]-(:Actor {name:actor})
With this, all the directions get reversed and all the actors come under a label Actor.

Now you have two nodes with same name George Clooney and Julia Roberts .
Delete any one node of same name nodes and create acting with another node.

Hope this helpful to you

Thank you for your time and your answer!

I have some doubts now, how should be the command to return the graph?, I mean, the RETURN command so I get the graph represented as I showed before.

Sorry for being such a noob

sorry, i didn't get your doubt.
If you want to see your complete graph, try below
MATCH (n) RETURN n
This will returns your created graph.

If you are asking how to create the complete graph as of the picture, try below.

Just copy and paste it neo4j. This will create the graph you want.
Hope it helps. If not please elaborate your doubt.

Great! Thank you so much!!!