How to avoid factorial (n!) path?

In my project, Neo4J stores staff nodes and relationships between staff.

I need to focus on any one person and find all the people within three degrees of path depth. My search statement is as follows:

When the site is small, there is no problem in searching in this way, and the path is obtained: 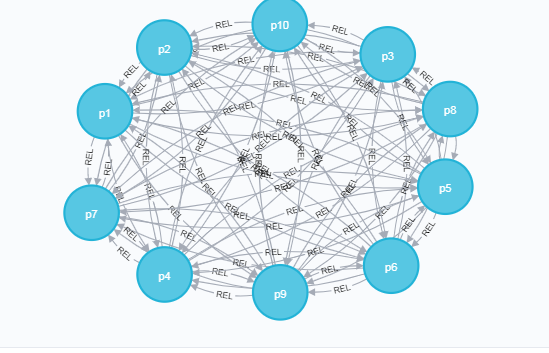 I don't know if it's what you need,
but If you can use APOC procedures maybe you could write your query like this:

or with a map return:

If your use case is to find distinct people within 3 degrees (and you don't actually care about distinct paths the way Cypher does) then you can use apoc.path.subgraphNodes(), a path expander procedure in APOC Procedures that is optimized for finding distinct nodes (and pruning any path found to a previously-encountered node).

This will only give distinct nodes back, it won't give back paths. If you want paths, then use apoc.path.spanningTree() instead, but be aware that it will only give back a single path per reached nodes, not multiple paths.

In this case you'll need to use apoc.path.spanningTree(), which does YIELD path instead of node.

The paths will automatically be shortest paths, since the procedure uses breadth-first expansion, and will only use the first path found to a node and no other.

thanks a lot! The apoc.path.spanningTree() function solved my problem. thanks again!