I received the following error:

I tried unsuccessfully to manually start the 'gdsDb':

I am not sure why this is. This particular example does not contain relationships, did that confuse Neo4j? Any thoughts on this are obviously welcome.

Update: I was able to replicate the Node Classification Example using GDSL 1.7. Apologies for noting originally that all calls to GDSL failed. My error. However, I am still unable to:

and start that newly created database.

Hello there @skerr,
that indeed sounds like a bug. Could you paste the error from the debug.log? There should be a stacktrace showing where this error might be coming from. You can find the debug log in the logs folder of your neo4j installation.
Cheers, Sören

@soren.reichardt - I'm having the same issue. The error is quite long, but starts with

As you can see from my screenshot, I'm trying to create a DB from graph1, so I'm not sure why it's trying to reference a "graph with name null." 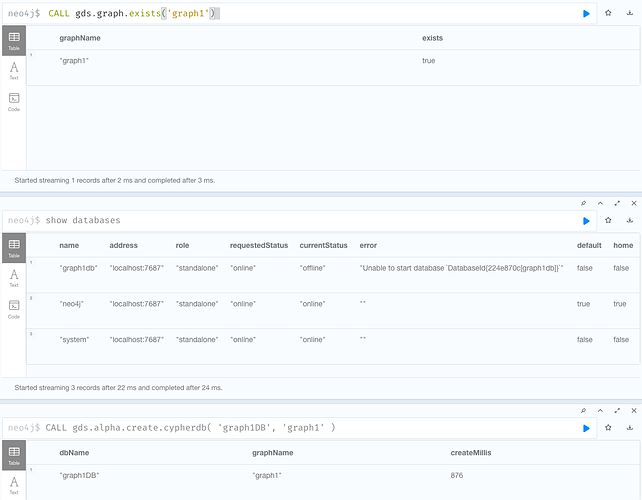 @skerr @jessica.f I was able to reproduce and fix the error when creating the in-memory database. It will be fixed in the upcoming 1.8 release.

I faced a similar issue and wonder if they are related.

@deepak.tanna : you're running the command to create a new neo4j database; to activate the database you've created, you'll need to take a few extra steps:

(or check out the docs here)

This is a different set of steps (see the documentation here) than what's described above - where folks are talking about trying to run cypher against the in memory graph itself (without creating a separate DB).

Thank you so much, Alicia, the steps you shared were in plain sight and I yet somehow missed it. Appreciate your patience