In the Online-Training Course: Introduction to Graph Algorithms — Exercises
:play https://guides.neo4j.com/4.0-intro-graph-algos-exercises/LouvainModularity.html
when doing this query:

it would be great to add some explanations of the results: 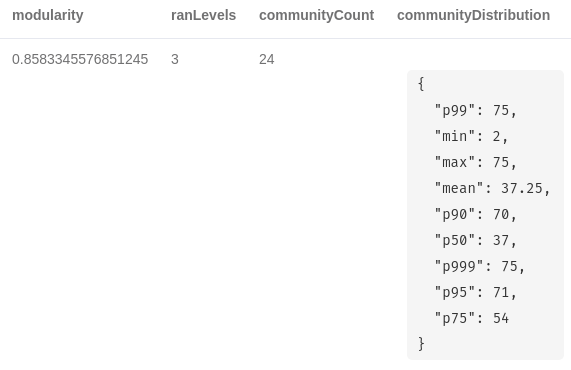 Are there any documentation about the values p99, p75 etc. ?

the documentation states that:

We will add the explanation to the browser guide.

Thanks for your feedback.

Thanks for the fast answer !

One other question about this Guide:
:play https://guides.neo4j.com/4.0-intro-graph-algos-exercises/LoadData.html
where you propse the inverse distance like this:
MATCH (:Place)-[r:EROAD]->(:Place)
SET r.inverse_distance = 1.0 / log10(r.distance + 2)
Why do you use log10 etc. when inverse distance would be 1/distance ?

If I remember correctly, the main reason was that otherwise, the weights would be super tiny, ranging between 0.0 and 0.1. One distance is 0, so you would have to do 1 / distance + 1. I think I tried both and it doesn't impact the results that much.

Thanks for the fast answer !

In Browserguide
:play https://guides.neo4j.com/4.0-intro-graph-algos-exercises/LouvainModularity.html
on Slide 11 of 16 the explanation:
"Antwerpen, Gent, Bruxelles, and six other places share the same community through all the hierarchical levels." does not fit to the values of the property communities_louvain, eg. [145, 192, 192] for Maastricht ?

Maybe the first/last run is not the best wording. The first or last hierarchical level is better. But yes, I think you are probably understanding correctly

Ok, when I'm right then Maastricht does not have the same community through all hierarchial levels.

Exactly Maastricht has a different community on each level. Keep in mind though that same of the communities might disappear on a higher level as you can notice there are more communities on the first level than the last one.

Ok, now I finally understand your point. Perhaps the phrasing is a bit off, maybe it would be better to say:

X,y,z share a common community through all levels or something like that. Something that implies that on each level they can be found sharing the same community id. Not implying that their community id dont change. Even when writing this response I had problem finding a nice wording.

Feel free to add a PR with better wording

I found this picture very good to understand the matter: 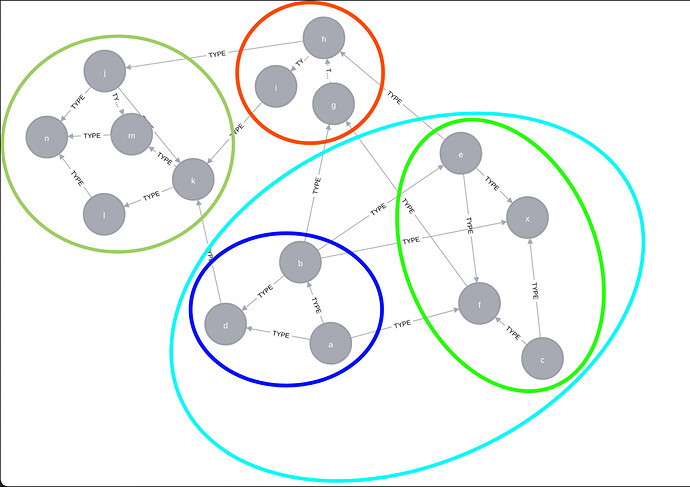 Does the number of hierarchies correspondend with the times the algo runs ?

Take a look at Graph Algorithms in Neo4j: Louvain Modularity

Thanks for that article !