On the Developer example project page in Data Setup (Example Project - Developer Guides) is a Cypher statement to LOAD CSV from Dropbox. Cool!

Dropbox would be great to share a quick proof of concept graph analysis, but the Dropbox file path fails with a 404.

Also, there is another query at the end of the "Endpoints" section that also has a LOAD CSV statement... without an explanation. Seems like it should be up in the Data Setup section? And what's it do?

Aha! Found a 2015 blog post by Michael Hunger with some explanation of the queries, and a query that will export the Movies sample DB into CSV.

Updating and incorporating that info into the Dev Example project page would be more efficient for newbies.

use coalesce() to set to something like "NOT SET" or "NA" in your loader script.

Thx for the idea. Oddly, the export does not appear to be missing titles.

The file parses correctly as a file:/// from the local Import directory, and fine if served locally via http (via NPM serve command), but fails via HTTP from Dropbox. The Dropbox URL includes a 302 redirect, so perhaps that's the root of the problem. 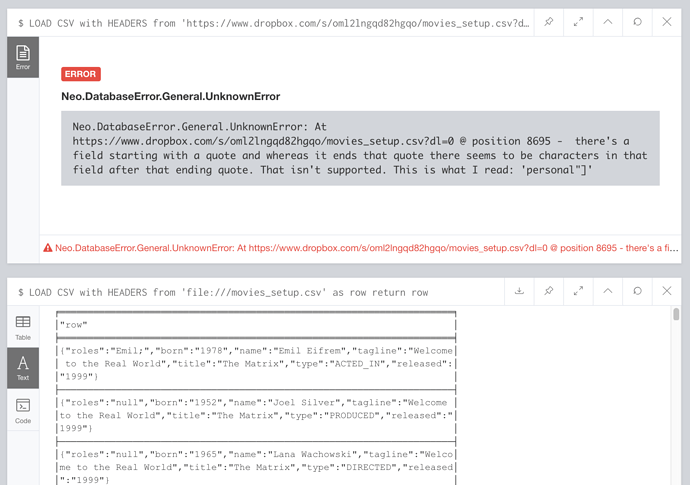