Dynamic evaluation of WHERE clause after SET

I'm trying to set up a plain Cypher query (without additional frameworks like APOC), which does the following:

The second one is the interesting param. A user can pass n amount of such skill-objects, which define the skill needed, the minimum level an employee needs to have and the amount of work percent.

I don't want to go too much into the detail, but the current Cypher statement looks like this:

As I am a newbie in Cypher, the code is not pretty, but it works so far. I receive a team with attached members:

Unfortunately, I can't make the last requirement work. Currently, all matching Employees are added, but I would like to have only the needed amounf of members. The formula would be something like SUM(member.freeHoursPercent) <= team.percent

As you can see on my Cypher, I've tried to do that with the
WHERE t.percent > freeHoursPercent

My naive hope was, that the SET would influence the WHERE in a way, that only as many members are added, as there are free team-percent for them. I've also tried several other possibilities, for example FOREACH with CASE WHEN, as described here Set only if condition satisfies but return the matched node - #2 by michael.hunger

Unfortunately, none of the approaches work. Also, every approach (setting temporary properties etc.), seem very imperative and not as elegant as the Cypher queries I've produced so far.

As a newbie, I'm not sure if my mindset is wrong or if I'm missing a certain function? Generally, I would need something like "take relationships until an aggregated condition on the relationships is met".

Is there something like this around in Cypher? Or would I need to redesign the query completely to make this work?

Many thanks in advance

Hello @matthias.mueller and welcome to the Neo4j community

I would like to see if t.percent is updated each time.

Thank you very much

Thank you for the suggestion. I would say, that t.percent is updated at the end: 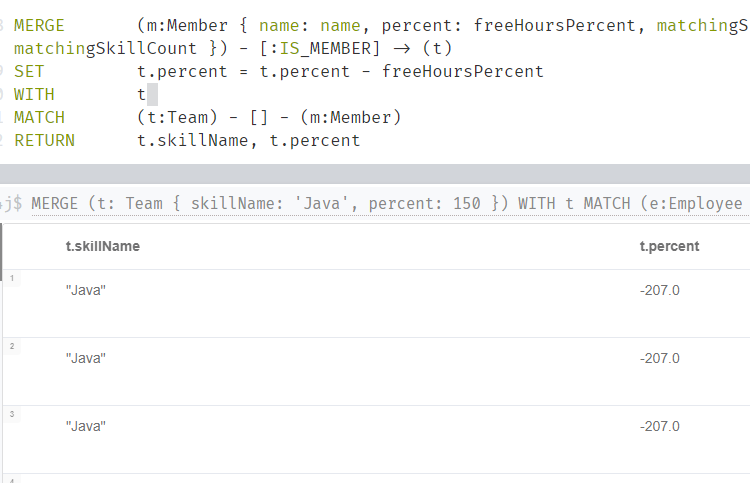 I've removed the names, as it is actual data, I hope this is fine.

Also, my approach doesn't work with Bloom, as I can't use SETs there. As I'm learning by doing, I'm generally not sure, if this approach is feasible or if there is an easier way to make this work?

One solution could be to collect and to UNWIND after, normally with UNWIND, your property should be updated at each iteration

Thank you your input pointed me in the correct direction. I've trimmed the cypher statement to make it easier to comprehend the case. A working solution is:

I have to say, I really dislike the solution, is it is a very imperative approach. But I guess there is no other way around to enforce cypher to re-evaluate a property after settings it

I'm pretty sure that with APOC, we could improve and optimize the query but it was not an option to use a PLUGIN

Another idea that you could try instead of collecting and iterating, it's to use a sub-query to update the propery.

@Cobra Thank you again, using Sub Queries seems way better than the for-each hack. If someone is finding this thread via google, my working version is looking like this: