Hi,
I am quite new to all of this but if you have a look a the neosemantics documentation you will find how every element in your input data is transformed. I made a quick table for me to have a better overview of the two impor.fetch procedures: 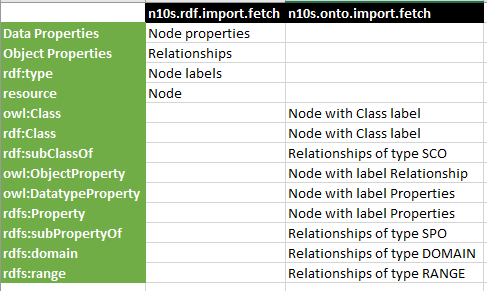 I think the usage is different and I will try to write the following triples (Why not if we are talking about ontologies):

Maybe my statements are wrong so let's wait for the experts to clarify.

What @paulhernandez is mostly correct.
The rdf.import methods import every single triple in your RDF, whereas the onto.import select only some elements and persist them in a simplified form in the graph.
You have a description in the manual of the details of this: Importing Ontologies - Neosemantics