Desktop not launching at all (windows)

after machine blue screen crash, neo4j desktop would not launch

the memory used changes over time, but that's it

any idea highly appreciated since I'm only a couple of days away from deadline to deliver DB before en of mission...

if you run into issues with Desktop 1.4.7 on Windows could you try this and report back?

try asking them to delete the C:\Users[USERNAME]\AppData\Local\Neo4j\Relate\Cache\plugin-sources\default-sources.json file and see if that helps? We think that the reason for desktop not starting for some users might be that the cached plugin sources has become corrupt

I have tried going to the path you shared and there was no plugin-sources folder but instead this path:

I've attempted deleting this entire Neo4j folder from the AppData but no change. I've uninstalled and re-installed Desktop version multiple times and it still won't start up.

Can you share the desktop logs? best as an github issue? 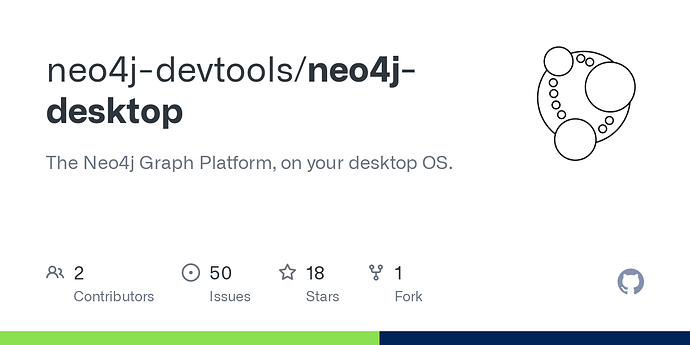 The Neo4j Graph Platform, on your desktop OS. . Contribute to neo4j-devtools/neo4j-desktop development by creating an account on GitHub.

Also 1.4.8 came out today which fixes several startup issues on Windows in case you want to give it a try.

Hi. Did you manage to fix this problem?

I downloaded neo4j desktop today and after initially opening it crashed and then would not reopen. I've uninstalled and reinstalled it a number of times but I have the same problem as you. It won't launch and it says there are 3 underlying processes running.

I tried deleting the json file as well but it didn't help with the application launching. Any help would be appreciated!

I have exactly the same issue. I can see the running instances in the task management, but the software interface doesn't start.
I have tried multiple troubleshooting and nothing worked. Can anyone assist me with this?

I have exactly the same issue. I can see the running instances in the task management, but the software interface doesn't start.