I'm scoping out Neo4j on the possibility that we might eventually deploy graph databases at work. Though I've not had much trouble following the tutorials, somehow I can't seem to make a simple graph with three barebones csv files. 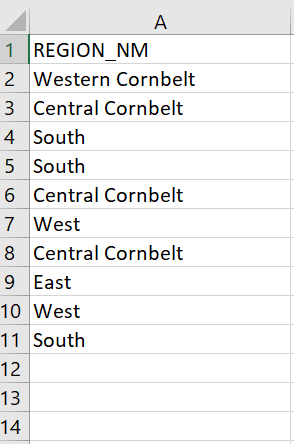 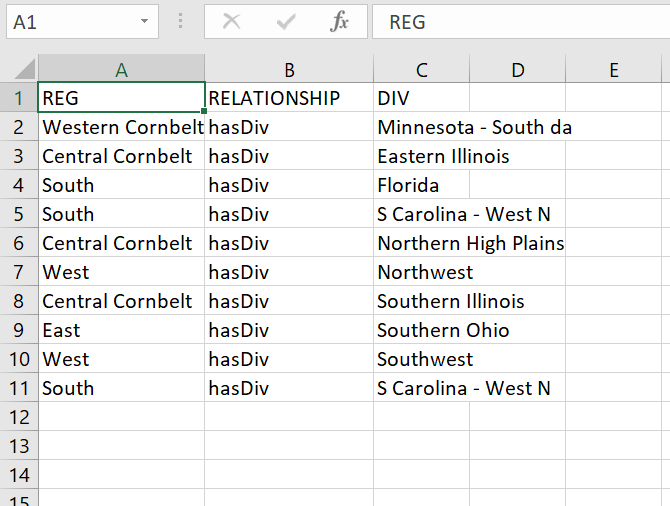 The first two .csv files I loaded with:

The relationship I loaded in with:

For the most part this is all taken from tutorials, but isn't working for me. There are two problems.

And second, when I load in the relationships nothing actually happens.

What I want is a graph with region nodes, and region nodes with division nodes hanging off of them where indicated.

Unfortunately I haven't kept a record of every experiment I've tried, but I've altered the syntax in various small ways (not returning anything, using create (from)-[:hasDiv}]->(to) instead of create (from)-[:REL {type: rels.RELATIONSHIP}]->(to), etc.)

I've also read a non-trivial amount of the documentation and searched the forums for threads.

typcially labels are applied via a

to load nodes with a a label named Division

And second, when I load in the relationships nothing actually happens.

and presuming when you run LOAD CSV against the location_dim.csv that the

Thanks so much for taking the time to answer. Your amended code did create labeled nodes, but unfortunately the relationship script didn't accomplish anything. I got a (no changes, no records) message.

I didn't forget to use CREATE (n:Region {reg: REGION_NM}) for the region script.

ok.. I think I see the problem.
To create the relationships your code is

This can be confirmed for example by running

which will return 3 :Region nodes and 3 :Division nodes.
And if I am correct then

should be rewritten as

Now I just have to figure out what to do with all these duplicate divisions. 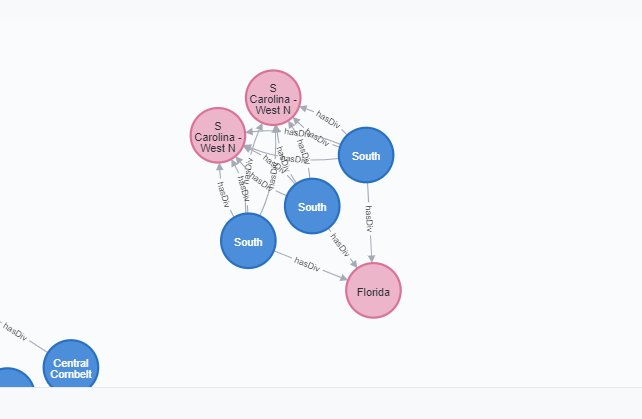 one last. if you continue, and if you have larger datasets so as to help the

ideally you should create an index on :Region and :Division and on the properties reg and div respectively. See https://neo4j.com/docs/cypher-manual/current/administration/indexes-for-search-performance/#administration-indexes-create-a-single-property-index for more details/syntax.

then merge acts as a create or replace. So if you run the script to create the relationships 5 times then you would expect to see no more than 1 :hasDiv relationship between 2 nodes

Good point! Replacing the CREATEs with MERGEs cleared that right up.

Here's everything, producing a simple, labeled graph with no ridiculous duplicates:

your image/screen shot. maybe start all over by

which will find all :Division node remove any associated relationships with said :Division node and then delete the node itself. And the 2nd statement will work on a :Region nodes in the same manner.

Upon running the 2 lines above all :Region and :Division nodes should be removed.

Then rerun the LOAD CSV statement and when creating :Division and :Region nodes change the create to a merge

sorry our post crossed.. but yes @trent_fowler your last post with all the merges is what should be used

You're awesome, thank you for the help!