Count number of Graphs in a DB / match result

As a Graph DB is a collection of Graphs (1-N), is there a simple way to return the number of Graphs? There are many possibilities to count nodes, properties and relationships, but don't seem to be able to find something on counting Graphs itself, and metadata on those Graphs. Eg returning that there are 5 Graphs of 10 nodes and 15 relationships and 5 Graphs of 5 nodes and 7 relationships ... would be a table if there are many Graphs. On a second level, the same counting on a match result - that is, match some condition, and count the number of Graphs of which the resulting nodes are part of.

Indeed, thanks, that gives ingsights for 1-level. What about 2 hops, 3hops ... further?

Maybe a little screendump can help ... 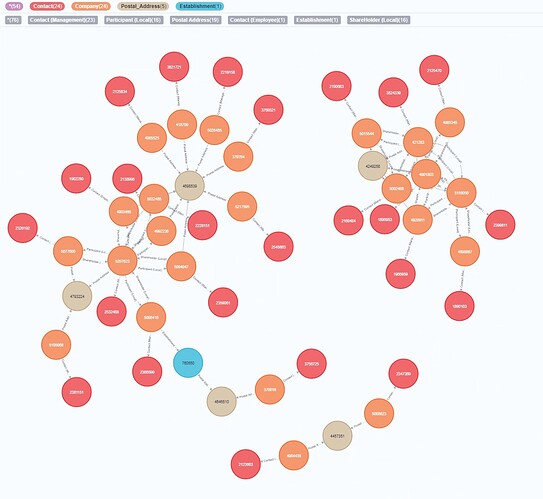 I will split this into a coule of queries. Somehow you can avoid some of them but I suggest studying them first individually before trying to collapse some steps.

1 - Create an in memory projection of your graph.

2 - Mutate it in order to add a property with the componentId when wcc (weakly connected component) is applied.

Lemme know if it works as expected in your graph!

This is the one-shot (anonymous) version of it,

Thanks ! Works smoothly on a smaller Graph, but haven't waited long enough on a large Graph.

Now, I think this is assuming each starting node is part of a unique component, right? What if some of your starting nodes are part of the same components?

I'm using everyone as starting node so yes, I do include node from same cluster for the relationship count. Can you tell me which step is the one extremely slow?

Not sure about steps. The Graph DB contains 70M nodes and 88M relationships, with 23 node types and 37 relationship types ... quite heterogenous ...

Does this query runs in quite decent time?