how will i combine this relationship? AND create one

Please specify, which end result you want to achieve.

is it possible to combine node p and then from p create relationship for node c and b?

Yes, of course. Where does your data come from? If you load e.g. all nodes first from a csv and then want to load the relationships, you can "match" for node p and node b, and then for node p and node c and create your relationships and then you will only have one node "p". However, without knowing where this all comes from, it is difficult to advise. Maybe this entry might also help you if you only have one file for nodes and relationships: How to create a relation from two columns in one table? - #4 by elena.kohlwey

Can you draw up an example of what you want? As far as I understand, you want to end up with: 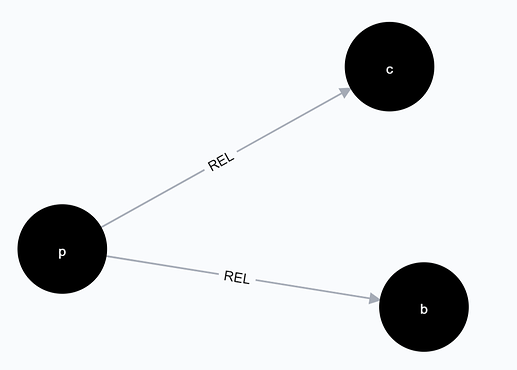 Is that correct or is that wrong?

You can never have three nodes connected by one relationship.

yes i want the same .So what alternate thing we can do ?

So, if I understand it correctly, you situation is the following:

And you do not want to have the node "3" twice, but only once. What you can do is:

Then you end up with

yes this will work. BUT y does java heap error occures

I do not have a heap error occuring. So, I can't say why it occurs for you...

uct in the query and you migh

can we extend the memory ?

It depends on How much feee memory u have in your system? How much is the data size? If both are enough to run the query then you might need to update the Neo4j configuration file

OK ! i will update the neo4j configuration file