Upon clicking on Neuler it attempts to connect, however, get's hung-up with message:

The application relies on Graph Algorithms plugin. You can install it via the plugins tab in the project view.

It did work for a completely new installed database that is empty.

Have you checked the plugins tab for that database, and ensured the graph algo plugin is installed?

Yes it is installed, even tried to uninstall, delete and reinstall, so far to no avail. Will attempt other things too see whether it would fix the issue.

A new install of an empty database from scratch worked fine. Might have to consider doing that for my older databases, those that were already there.

If you can start the database, can you do a sanity check and see if the graph algos are indeed loaded and usable?

You can use return algo.version(), which should provide the version of the graph algo library being used, if it loaded properly.

This is what I found running this command, indicating that it simply doesn't see the plug-in.

Maybe that helps understand what might be happening. At least I know a workaround now.

Thank you for your suggestions!

I am unable to use the codes produced by Neuler app on the Neo4j browser. It is showing an error. Any idea as to why? 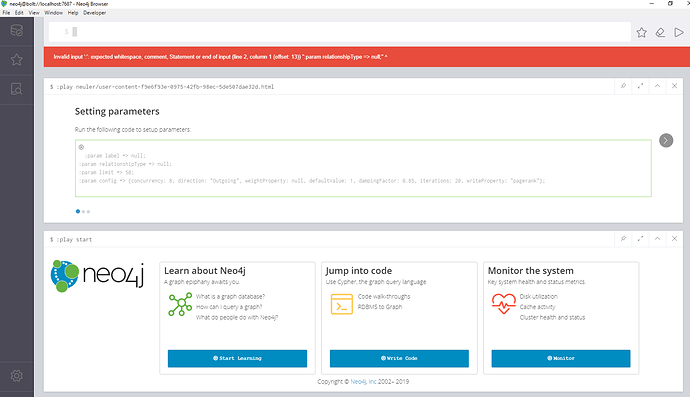 I would try to use both relationship directions, I got it to work that way. You may have to push the code into the Neo4j Browser and then follow what happens there.
The application Neuler is a great start, but still seems to have some rough edges.

I enabled the multi-query editor in Neo4j browser settings and it worked.