Hi there, I am trying to create a filetree-like query where I need to get the user's Breadcrumb up the tree. Since we want to implement folder/file sharing, we have to cut the breadcrumb off the moment we have a "broken chain" in the permissions. The data looks like this: 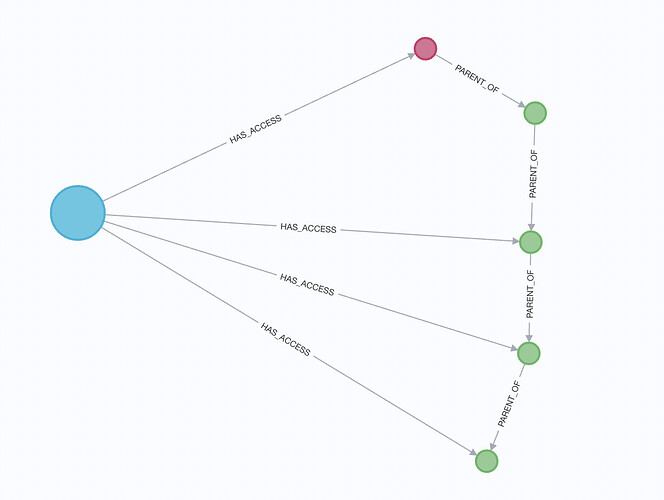 If we query the bottom folder (green) then we expect the two folders above that to also be in the breadcrumb because the user (blue) :HAS_ACCESS to the folders. But since there is a "broken link" on the first folder, we don't expect to see the Root (red) and the first folder in the Breadcrumb. My query currently looks like this:

This returns the full tree: 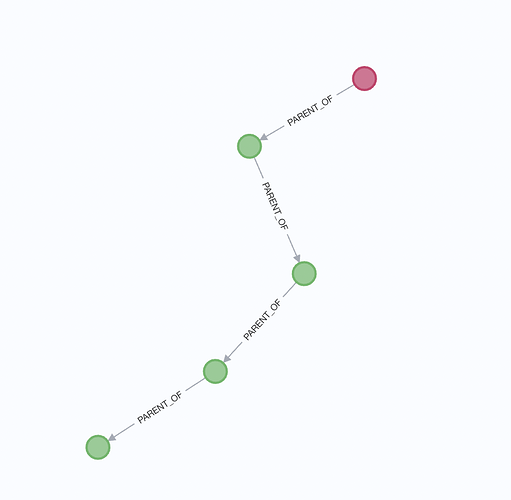 Not what I'm looking for. Changing the WHERE clause to:

Gives an error: Coercion of list to boolean is deprecated. Please consider using NOT isEmpty(...) instead.

That being said, neither of these options feels like the correct way to go, they were both sort of just a shot in the dark. Are there any good ways to terminate a path at the point where some relationship does not exist?

Bonus question: how does one return just the longest path. Eg. In the case where we have

I know the example above is a bit contrived, so take it with a pinch of salt. Thanks in advance!

To answer your second question first, you could do something like the following to get the longest path:

You could try the following. Note the variable path has a minimum length of '0', allowing it to match if the folder does not have any parents. You need to explicitly start at '0', as length '*' has a minimum of 1.

Note, the warning is due to the fact that the ability to use a path as a predicate in a 'where' clause is deprecated. This is what it is referring to as 'coercion of a list to boolean' is deprecated. The path in the where clause is being converted to a boolean value. The new syntax is to use 'exists( (n)-->(m) )' instead, where the 'exists' method returns a boolean based on the existence or absence of the path.

That's exactly what I needed, thanks so much!