I'm new to Neo4j, and this is my first time posting. I'm trying to create a monopartite projection from a bipartite graph. I've only got two types of nodes: 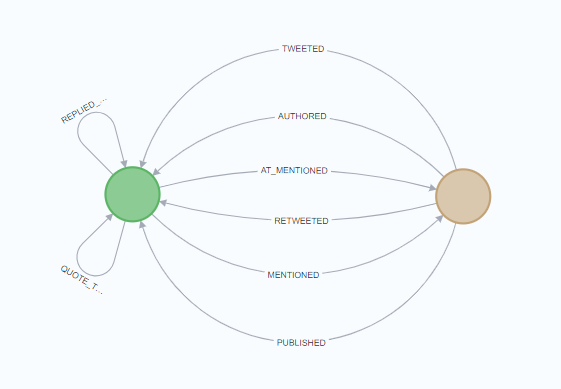 My challenge is that I have a handful of different relationships. Some examples:

What I'm trying to do is

In other words, using the examples above:

I can find examples online that convert only one type of relationship to a monopartite but can't seem to get anything to work for multiple relationship or relationships that have an intervening node of a different type (i.e. two post nodes between an entity node). I've done the graph data science training and couldn't find exactly what I was looking for there either.

If you're using GDS for monopartite projections, you can write any arbitrary Cypher query for a node projection and a rel projection. This can navigate as many steps in whatever order you like.

You've already got the right patterns, abstracting a bit you might use this as a node projection:

And this as a rel projection

Notice we're using blank, anonymous, un-ordered relationships -[]- meaning we don't care the rel type, we don't care which direction. We just know these things are connected with something else (a post) in the middle