Are there any real instructions for using py2neo?

As a concrete example, I've got a node using
thisNode = list(matcher.match('Label1'))[0]
And now I want to get the list of nodes connected to this node via a particular kind of relationship.
I think this Cypher query works:
`list(graph.run("MATCH (n1)<-[:PARTOF]-(n2) WHERE ID(n1) = $thisID RETURN n2", parameters={"thisID":thisPrefNode.identity}).data())
And the question is: How do I do that in py2neo without using Cypher?
Since the parent node is already stored in a variable in python, this should be an easy thing to do, but...

And the broader question is where can I go real/learn about how py2neo works? There is barely any assistance on Stack Exchange, most of which is obsolete anyway. Is py2neo basically just not supported? In that case, is there a better way to interface between Python and Neo4j?

For this specific question, I actually found a partial answer in the handbook:

but, for my case the direction is in the wrong direction. The syntax is totally opaque, and the only guidance on what to even try to get the desired results is from the minimalist documentation: Parameters: nodes – Sequence or Set of start and end nodes (None means any node); a Set implies a match in any direction

There are no real instructions to explain the syntax nor any other examples for other use cases (like mine).
By trial and error I was able to figure out that
for rel in graph.match((None,alice), r_type="FRIEND"): print(rel.start_node["name"])
actually gets me what I want in this case, but by just putting a few more examples in the documentation would clarify the syntax and help many (and especially new) users.

So I guess the answer is "No. There is no real support or documentation for py2neo. And there is no better way for Python to interact with Neo4j. You're on your own and it's totally hopeless." That's pretty sad if you are looking for customers for your technology. 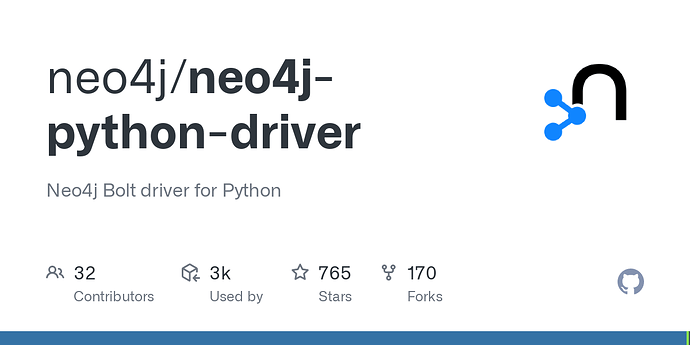 Neo4j Bolt driver for Python. Contribute to neo4j/neo4j-python-driver development by creating an account on GitHub.

Or if you want to stick with Py2Neo, here's a blog post with some examples of usage: 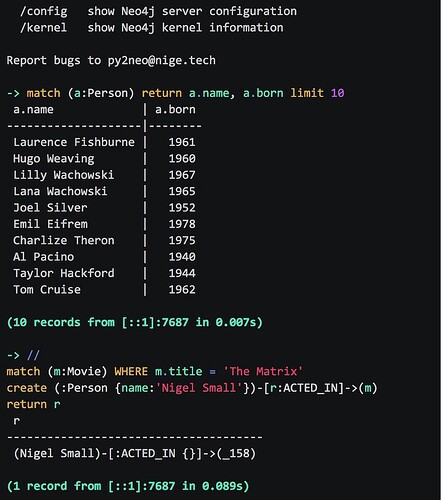 Py2neo v4: The Next Generation

As both a busy dad and the team lead of the Neo4j Drivers Team, the amount of spare time I’ve had to work on personal projects over the…

Thank you for responding, but if those are the two best sources you can point me to, then it seems the answer hasn't changed. There is basically no real explanation or useful examples for the vast majority of the commands listed in the documentation, and no resources for getting help learning to use Neo4j or its Python drivers.

I'm working on a pilot project using graph databases in my company, but after my experiences struggling for hours to perform basic functions, I really can't recommend this technology. Not because of what it can and cannot do, but because there is no way to train our engineers to do what they need to do.

I highly recommend committing serious time/effort in some actual instruction and more complete documentation (basically just add a lot more examples covering a lot more use cases to the documentation). You might also considering having people respond to posts on Stack Exchange and/or your own forum.

Regarding the Python bolt driver, the page I linked to should have additional links at the bottom to our drivers documentation which should be applicable for all drivers (including Python)

This is the driver manual for Neo4j official drivers version 1.7, and the Go driver version 1.8, authored by the Neo4j Team.

I just wanted to make sure you've visited that part of the documentation, as it does contain examples of usage.

When using the bolt drivers, most of your Python code around driver usage won't change much, it will just be the Cypher executed (and perhaps parameters passed) and how you consume the results that will change.

One additional thing to keep in mind...

Py2Neo isn't officially company supported. It's a community driver, volunteer-based project, and while there are some engineers who contribute to it, it's not something Neo4j the company has adopted for full support/documentation/love+care. We'll do best-effort, and get those involved who contribute to the project, but it is not a Neo4j product.

The Python bolt drivers, however, are under the company's stewardship, so we have official documentation and examples present, which I've linked to.

As for using Neo4j itself, we do have plenty of resources, starting with our developers manual, but we certainly are not lacking here.

Here's a few links to start with:

This is the developer manual for Neo4j version 3.4, authored by the Neo4j Team.

Getting Started with Neo4j - Developer Guides

Become an expert Neo4j developer with these introductory tutorials and guidelines that cover the entire development lifecycle, from download to deployment.

This guide provides an overview of how to connecting to Neo4j from Python.

If you have questions about certain aspects or topics in our documentation, we're more than happy to point you in the right direction.

While it is cheap to bash documention, I'm afraid I agree with the original question, the docs / examples for learning CYPHER are pretty dire and the support for python is meak.
The examples in the guide are either very basic or partial.

As for what to do: Try around in Cypher in the app, ask stackoverflow and the docs and then work your way through it. Then run the code from python or wherever. Not ideal but so far the only way I can make it work.

I'm very impressed with some of Neo4js capabilities and underwhelmed with others, but I guess that is normal for new tech your learning. I have yet to visit a training session and hope that it will help me along.

I would love if you could point out specific things that you feel are too weak.
Also which topics you want to know more about.

Did you see the new online intro course which tries to remedy some of the Cypher learning issues:

I'm not in a position to say how the docs should look, as I haven't learned enough about cypher however an example of a particularly irritating page would be: optional match where the examples given are trivial and return null, hardly something useful to learn from. In general most example pages have only very basic queries and to get to understand how to construct more complex ones is more difficult than necessary.

Just as a guide, the answers on SO rarely link to relevant pages in the docs, while in other languages and packages where the docs are more complete they do so for basic questions like the cases just described.

And no I haven't tried the course and if it addresses the above issues that is great, but really that should go into the manual as a lookup not hidden in a course.

Thanks a lot for your feedback, we will improve the docs overall.

Are you in general looking more for intro to new topics or solutions to really tricky questions?

For the latter the knowledge base is a much better fit (Knowledge Base - Knowledge Base) which is more "how-to" oriented. The docs are more reference docs in that regard.

Did you see this intro which is more of a tutorial: Introduction to Cypher - Getting Started

In short, you would use OPTIONAL MATCH when there may be certain connected nodes that you want to use or output, but you don't want to disqualify your match so far (don't want to wipe it out) if such a pattern doesn't exist. The thinking when using this is: I want to get this if it exists, but it's fine if it doesn't.

In light of this, does that help you understand what OPTIONAL MATCH is for, and does that suggest any more specific points that would have made the purpose and usage clearer?

Same problem here!
And I eventually find answers from this post, not from that 'handbook'

If anyone else came here to consider using py2neo, here are some more negatives (sorry)

At the time I tried this, the official py2neo available on pip didn't work with the available neo4j server version it says it works with
detailed here : SyntaxError: The old parameter syntax `{param}` is no longer supported · Issue #791 · py2neo-org/py2neo · GitHub

There is a fundamental strangeness about the library that my mind doesn't quite get over:
I want to keep track of a node like this:

But apparently you aren't suppose to just have these "unbounded client side" node objects really.
If i want to use this object i have to go through a few hoops for every single node:

As far as I can tell, I cant use any of the features such as "database.merge()" or "database.nodes.pull()" or anything with the Node object unless i already read that object from the database and I have a "bound" object. I might be wrong, but i think the only thing you can use an "unbound" Node is just before the creation of a brand new entry in the database.

So really I can't work with these objects in a general sense, I have to keep all my node structure as disparate combinations of strings to use the matching functions?

Can you explain what you mean by "I want to keep track of a node"? Node objects, as you describe, can be bound or unbound. This means that the client-side node object you hold in your application may or may not be linked to a server-side node in the database itself. If you create a local node manually, as in your first example, this holds no link to a remote node; what would you expect it to automatically link to?

If you are asserting that the code node = Node("App", name="JackettIndexers") should create a local node variable that is somehow automagically linked to a remote node in your database, there are several problems with that:

Internally, the binding information holds two things: a reference to a Graph object and a unique node ID. If these are set to None (as is the case with a new local node by default) then that node is considered unbound. Retrieving a node from a server operation will give you a bound node.

Being new to py2neo, I'm trying to understand its concepts. Regarding bound nodes, I did the following experiment:

like many of the responses above I just tried to use py2neo and got stuck on some of the most basic use cases from the handbook. While the API looks very pythonic and simple, py2neo is just not usable.

I think the best solution is to write cypher queries in the neo4j app, then transpose them into python functions wrapped with the official neo4j bolt driver.

That way you learn the cypher query language, which is really powerful.